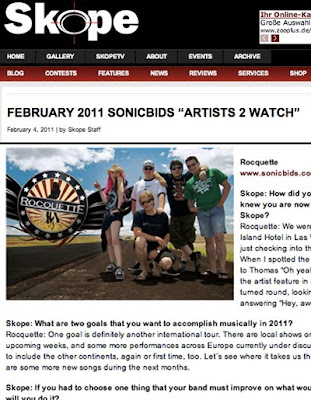 Skope: How did you react when you knew you are now A2W selected on Skope?

Rocquette: We were at the Treasure Island Hotel in Las Vegas at that time, just checking into the E-Mails quickly. When I spotted the answer, I yelled over to Thomas “Oh yeah man! Selected for the artist feature in Skope Mag!” and he turned round, looking at me and answering “Hey, awesome!!!”

Skope: What are two goals that you want to accomplish musically in 2011?

Rocquette: One goal is definitely another international tour. There are local shows on the schedule for the upcoming weeks, and some more performances across Europe currently under discussion. We would love to include the other continents, again or first time, too. Let´s see where it takes us this time! Another goal are some more new songs during the next months.

Skope: If you had to choose one thing that your band must improve on what would that be and how will you do it?

Rocquette: Well, maybe a little help with organizational issues would be good – as a DIY band, there is all the “behind the scenes”-stuff that takes up most of our time. I feel that we could be much more efficient with spreading our music with some more hands e.g. on the computers, and what is more, we could be faster with the songwriting too. Currently, there´s just so much to do, that we often have to leave the fun part (making music) for later, because things need to get organized first. And of course, it would – actually even help the issue too that I just talked about – great if we could make a living out of our music, and focus on doing what we love.

Skope: What are two other non-mainstream musicians or bands that you are listening to these days & respect?

Rocquette: At first, of course there is Aerosmith – our all time heroes. They do have some mainstream songs, one might say – yes, of course. However, the majority is non-mainstream (last album was a blues album). Their songs are on air since ages, anywhere in the world, still gaining new fans! And it´s one of the bands, I can listen to in nearly any mood, at every time of the day. We just love Aerosmith! Another band that is in heavy rotation of our players is definitely Airbourne. When the people around me had no idea who they are, I used to describe them as “AC/DC on speed”. By now, they made their name quite big, and they are playing the huge festivals, sending you home with an immense head-banging-pain (and, as they do sing too, “your ears bleed “) LOL

Skope: How has playing music offered more fulfillment in your life?

Rocquette: It´s the one thing that helps with everything 🙂 It let´s you forget about problems, makes you happier, can make you even more sad when you´re having a heart-ache, let´s you fire-up your energy, or chill you out on a Sunday… It´s like the air that we breathe.. always with us and we couldn´t stand a day without!

Skope: What is coming up for you & where you at online?

Rocquette: We are looking forward to some interviews on radios and TV shows, as well as some more performances. We are also working on a music video, our first one, which is a big deal to us 🙂 The easiest way to find us in the web is www.rocquette.net, it´s our official website, and it´s connected with a lot of other websites like our facebook profile, MySpace, iTunes, CDbaby and so on. By the way, we really appreciate comments, criticism, “likes” and all that stuff – the thoughts of our fans are the most important ones! So, to you all out there – just head over and feel free to fill up our pages!!! Make our day and our server crash 🙂 And if you want us to play a show in your area, let us know! We´d love to make it happen! Keep on rockin´!

Neue Playlist: I Got Pickles