AUSTRIAN HARD ROCK BAND ROCQUTTE ARE CURRENTLY CAUSING QUITE A STIR ON THE EUROPEAN HARD ROCK CIRCUIT. WE RECENTLY CAUGHT UP WITH THE BAND TO FIND OUT ALL ABOUT THEM.

Could you please introduce Rocquette to AFV readers?

Barbie: “We are a rock band from Austria, formed in Lower Austria in January 2005. I ́m Barbie Hardrock, lead singer and songwriter. Thomas M. Perry „Mr. TMP“ is not only our lead guitarist, but also producer, song writer, and graphical-creative head. Oliver H. Scheuer  is our master of the drums, and Victor Ezio-Gabriel is completing us on the bass guitar.”

How long have the band been together?

Tom: “Barbie and I are now active for about 7 years. Time and people went by, but I‘d say the inner circle is still the same since then.”

Barbie: “That ́s true, Tom and me are working as a team since the beginning of Rocquette, and we ́ve been writing nearly all our songs together. Since more than a year, Victor is our bass player, and Oliver joined us in August last year.”

How did you all meet?

Barbie: “In 2004 I was looking for a new guitar player with my former band, and Tom showed up at one of our auditions. He convinced us all at the very first moment, and even when the band split up later, we quickly hooked up again to start another project which then became Rocquette. Victor was a very good friend of us for already a long time, and when we were looking for a bass player for some shows we had on schedule, it was obvious to reach out to him. We ́ve been looking pretty long to find a drummer who really fits, and finally Oliver contacted us through an advertising we put up somewhere – I don ́t remember where that was, but it was like coming home after a very long time.”

How did you pick the name?

Tom: “I guess we tried to find a name that combines ‘rock’ with a classy note on it.”

Barbie: “Yeah, we wanted to include the genre title, and at the same time spice it up with an elegant, melodic touch.”

Can you tell us about your previous CD releases?

Barbie: “Our first releases was a demo-album called ‘Detoxic’, a collection of our previous songs we worked over for starting up fresh with the new band. It was a limited pressing and sold out soon (already 2005). The first official album was entitled ‘Too Fast For Love’ and was released in 2007. Then we had some digital only single releases like our fun and uptempo ‘Christmas Song’, and the two singles ‘One And Only Drive (That ́s Your Life)’ and ‘Mhmmmargarita’ which were then also included on our current 2011 album ‘13’.”

And you have a new single out at the moment entitled ‘Wake Up (Voices of Fukushima)’ which is actually a single and an e-book, can you tell us about this?

Barbie: “ Exactly – we just released a brand new single, which is the theme song for an electronic photo- book by Show Udajima called ‘Truth of Fukushima’. Our song and Show ́s book is a collaboration between Austria and Japan – we ́ve never done anything like this before and I think it is such a wonderful thing we could make this  happen, especially with it all happening for the good cause.”

And how did this collaboration all come about?

Barbie: “I am a heavy Facebook user, and that way I got to know Show Udajima, who is avphotographer and book author from Kóbe, Japan. He told me he was writing up a book about real stories of Fukushima – he therefore held interviews with victims and collected their personal stories including a lot of photographs to show them to the world. He told mevhe would like to release this photographic e-book in Europe too, and he would love to add a theme song with it. I was so touched by all he told me, and he really got me into this topic. When he asked me if me and my band would like to write a song for the book, we felt a very strong responsibility and possibility to build something really nice, and huge, telling the story that Show is also presenting in this book called ‘Truth of Fukushima’. It is not about nuclear facts or health damage reports, there are reports and documentations by experts available on the web – the focus of the book lies in how the disaster hit the citizens of Fukushima, how their families were torn apart, and what people felt when they were suddenly confronted with this situation they never expected to happen. It is a document of what happened in March 2011 and months after, and it is meant to spread the word and share the love for the families in need. We want to show our sympathy and solidarity with Fukushima, and it is on everyone now to decide what to do after reading this book, it is a question of humanity.”

And where can people get hold of the download?

Barbie: “ We have a combined download prepared on our website rocquette.com in the music section, where you can get the single including the e-book as a download. You can also get the single on iTunes, CDbaby and hopefully the upload of the book to Amazon will make it available there, soon, too.”

Do you have any plans to visit us here in the UK in the near future?

Barbie: “Actually yes, we are currently talking about a show at the Exposure Music Awards.  Hopefully, we will soon get the hard facts and if all works out, we might already plan our trip for June. The UK is definitely on our list, and we ́re just looking for the right  possibilities to rock you guys.”

Finally, is there anything you would like to add?

Barbie: “In first place, thanks so much AFV for inviting us to this interview – so cool to be part of you! And a message to everyone: If some of you guys are on Facebook/Twitter, hook up with us! There is also a news blog on our website if you ́re curious what ́s going on, and we got a Youtube channel (RocquetteMusic) too where you ́ll find some music videos but also funny recording sessions and stuff like that. We ́d love to hear what you think of our music, videos, artworks, shirts and other merch stuff. Maybe you got ideas for us, or you want us to come to your city – we ́re always keeping our ears and eyes open for anything. We ́re also thrilled if you just drop us a line saying you dig our music or you really can ́t stand it at all 🙂 And hey if we meet at one of our shows some day – that ́s what would REALLY make our day!

ROCQUETTE – “Wake Up (Voices of Fukushima)”

Austrian rockers Rocquette show a slightly softer and more melodic sound with this single that accompanies Show Udajima’s photographic e-book written after the actual event and true stories of the Tsunami and nuclear disaster in Fukushima, Japan on March 11th 2011. The Song is beautifully written and delivered and is very touching with the emotion and passion that has gone into it. The single really does pull on the heart strings as the lyrics really do hit home and accompanying the images make you realise just what a catastrophe and atrocity the events of the Fukushima horror caused and the affects that it had on an entire nation. A lot of care obviously went into the writing of the track and Rocquette have done an excellent job in delivering the perfect track to accompany the e-book and make you think as you’re viewing the horror in the images. This is a very touching song written with pure, honest and total emotion. 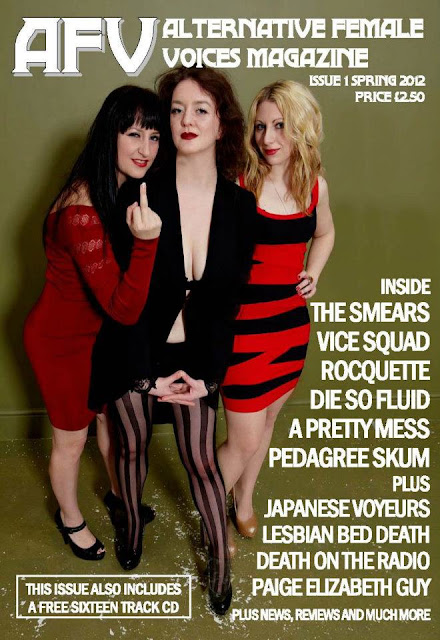 We are CELEBRATING! Ticket sale has started!